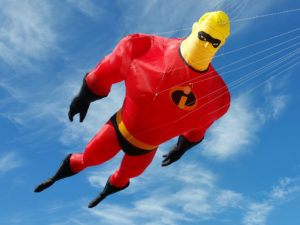 With the 31èmes Rencontres Internationales de Cerfs-Volants in Berck-sur-Mer less than a week away, the weather was finally came good, and we were able to get out and test fly this winter’s efforts. First in the air was the X-2 (MK-VII) experimental molar flowform, as hoped the design has turned out to be pretty much self launching but my initial thoughts were that it was unstable, so we switched to my trusty Gold Flowform which turned out to be as equally unstable probably due to the fact that the wind was coming over town rather than off the Heath, so my assessment may be wrong.

Next up was an 8m3 Bridle Stacking Pilot, this one has been specifically built for night flying, the design is based on Peter Lynn’s plans, but has longer length bridles. The bridles on the plan appear too short to me and the short bridles and deep keels have proved problematic for other kite maker’s so this version has bridles similar in length to an 8m2 flowform. The kite proved to be reasonably stable after major bridle adjustment, and happily stacks with the Gold Molar Flowform.

With the new kites tested it was on to the inflatables and first up was Mr Incredible. Over the winter I upgraded my copy of Metasequoia to the EX version which contains a measurement function this meant that I was able to design Mr Incredible’s bridle in 3D and actually take measurements of each leg, as a result he flew out of the bag and only need a few tweaks to take out small amounts of slack in a couple of lines.

Last up was a second inflatable, but this one remains under wraps, but as with Mr Incredible the bridle was designed digitally and barring a problem with his hands he flew out of the bag. Revisiting the bridle one back in the workshop, I believe I can see where the issue with the hand bridle lines and a modified design has been developed